If it weren’t for your gumboots where would you be?

You’d be in the hospital or infirmary,

You would have a dose of the flu or even pleurisy,

If you didn’t have your feet in your gumboots!

With the familiar lyrics of the fictional character, Fred Dagg, ringing in our ears let us tell you about TracMap’s latest campaign.

For a couple of months leading up to Wellington’s launch, the team worked hard to create this unique social media campaign that aims to raise funds and awareness for Fit4Farming. To do this we decided to send a Red Band gumboot roughly 2222.7 kilometres up New Zealand.

The travelling gumboot, Wellington is about as classic as kiwi onion dip; robust, hard-working, a rugby enthusiast. Welly got into his exercise in order to be fit for farming before his journey.

While out on one of his morning runs, he decided to take a detour but became lost. On his detour, Welly became separated from his ‘solemate’ Galosh and needed to get from Bluff to Cape Reinga on the top of the North Island. When he made it to the Cape Reinga with the help of Twitter users, Welly found that Galosh had grown tired of waiting, and had taken off on a ‘wellness retreat’ to Samoa with the founder of Fit4Farming, Ian Handcock. After all, why should he be the only gumboot to have fun?

Throughout the journey, Wellington was tracked by a system that was powered by TracMap, a replica of the sophisticated technology the company sells. Once Galosh returned from her retreat, the pair were reunited at the Auckland Airport and are set to be auctioned off on Trade Me on August 22; this is the same day as the grand opening of TracMap’s Global HQ. 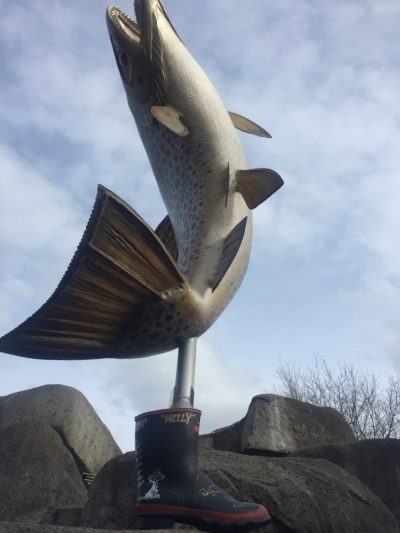 And at the other end of the country, with one of the team from TracMap’s Northern-most customer, Parengarenga Corporation, at Cape Reinga: